Today early morning, Pulpo Paul walked through my door
Splash! Splash! The water dripped out from his eighty pores'
Green were the slimy creatures sliding behind him
Holding the eight flags that had made the world believe
That he was greater star much bigger than Tendulkar Sachin
Who often consulted a parrot before playing world cricket
Wiping his brow, Pulpo silently slid into my kitchen bucket
Started a primer of one month old football magic 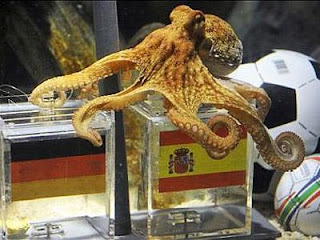 For those who don't know what I am talking about.'Paul Pulpo' is the spanish word for 'Paul the octopus'.....
Paul the Oracle Octopus is clearly the biggest winner of the World Cup after recording a perfect prognostication record whether he knows it or not (he probably doesn't).

He performed eight picks, eight correct, eight tentacles and even predicted Spain as the winner of FIFA....and I was smitten by his prediction...know what I mean???

In India Cricket is the craze....hence the reference..parrot is the one to whom ppl go for horoscope sometimes....

It feels good to be appreciated
Do you love what you read here? Copy, churn, reproduce, share or imitate....knowledge is for sharing....But, do acknowledge me, or better still.... send me a copy....... @Pushpa Moorjani