Life is beautiful
I had told you so
Had you lived within its norms
You would not have to go
So young, inexperienced
You wasted it all
With your pre-matured and
Unannounced call

What is my life without you, my son?
I toss and curl
In mid night blues
I am lost
In murky misery I dwell
You rest in peace
But
I burn in hell! 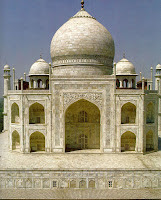 Are You visiting me? are you coming

to my wonderful land….My India…I am very sure that you will love it! As you experience and explore the unique flavors of my land, its memories will cling to you for many years! Beautiful memories! I am sure of that!

Yes I agree, India is famous for 3P’s : Poverty, Population, Pollution. But that is not what one should define India. Their hospitality and love will entertain you; their smile will brighten your day and the food; (hmmnn) you will love it.

Be sure to try our mouthwatering kababs and roasted chicken in the narrow alleys or the pani puris and bhelpuri at the beaches or the batata wadas at the railway stations. We have roadside tea-stalls that sell flavored tea

Be sure to visit our Gods in our temples. We have Him in different costumes, and in different shapes but All have their mystic powers that will bless you everyday!

And of course, enjoy at least one bollywood film! You can learn a tune or two and take back with you to relate to your friends!

‘Why can’t people, who have small children, sacrifice their outings?’ I wondered as I looked out of my window.

I was happily enjoying the bus ride, when momentarily I glanced at the standees that crowded near my seat. Amongst them was this young lady who cuddled a baby in her one arm and held the small hand of her 2-year-old son on the other side, simultaneously balancing the jerks of the bus and almost falling on the fellow passenger. My co-passenger immediately offered her the seat which she accepted with a smirk and plopped down on the seat next to me. The strong smell of vomit from her baby was very nauseating, I wanted to vomit too. The baby was fast asleep and lay against her mother’s shoulder. Her soft warm fingers caressed my shoulder carelessly with the movement of the bus. Her 2-year-old son squeezed into the narrow gap between the seats and stared at me. Nursery rhymes played in my mind as I smiled foolishly trying to get his attention, but the child seemed too tired to smile. I offered him a road side view from my window seat but he was not in good mood. He stood thus, between her legs, almost dozing, not knowing that his destination was one hour away.

With every jerk, he banged his head against the back of the seat.

His mother rubbed his head lightly and tried to shield his head with her palm. The bawl stopped and the child was calm again. The baby on the shoulder was uncomfortable now and she tried to shift her tiny head, rubbing her wet nose against her mother’s neck. It was time to change the position of the baby now. The lady lifted her one leg and spread it across the seat, overlapping my thigh, and cradled her baby on the crook of her thigh. This removed the support of her son, who now fell down.

I wanted to offer him one sweet from my purse, but I was afraid that his mother would misunderstand me and might think that I was trying to drug her child.

“Stand up!” she shouted sternly in her native dialect.

She helped her son to get up and leaned him against her leg, her son held on to her arm.

The baby was not happy with this new position and stretched, lifting her buttocks up in the air and moving her arms angrily above her head and squealing. The woman started vigorously shaking her leg, trying to pacify the baby. With her vibrating leg, my thigh vibrated too. My free massage session had begun but baby’s squealing would not stop. Her son watched as his mother snuggled the infant closer to her breast, and covering her baby with her dupatta, she extracted her breast from the bra and thrust the nipple into the baby’s mouth.

Thus baby’s dinner time was taken care of. Thank God, women can carry basic necessities of an infant with ease! There is no need to sterilize the bottles, or boil the milk just pluck, thrush and feed! Voila!

The bus moved at a lightening speed and I was enjoying the stinging breeze. Suddenly there was a sharp jolt as the bus came to screeching halt.

Her son’s head bang hard against the seat. The baby was confused as the nipple oozed milk on her nose, on her cheeks and on her eyelids.

Shut up! Screamed the mother in her native dialect as she widened her eyeballs and stared at her son. I could almost see the fury rings from her nose!

There was unsynchronized harmony of sounds. All the passengers in the bus were distracted from their reverie and all looked in the same direction, first at children, then their mother and then at me. Why me? What did I do? Hello! I am innocent. Blame it on the driver, who is driving so rashly. Blame on the children, who are hungry and tired. Blame it on their mother who is so brave! Stop looking at me!

My destination was still fifteen minutes away. I contemplated taking a taxi for the rest of the journey. But how do I find my way from this trapped position? Lift this lady’s thigh away from mine and enrage this baby and her mother!? I dare not!

I continued reciting “Hail Mary, Full of Grace…’ as I closed my eyes and blocked off all the mixed sights and sounds for the rest of the journey, wondering, ‘Why can’t the people who have small children, sacrifice their outings?’ huh? 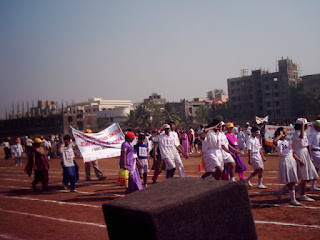 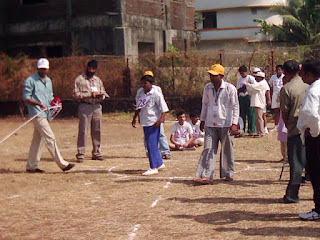 To celebrate the ‘World Disability’ day on 3nd December, a sport day was organized by Jillah Prashad of Thane distract and hosted by Swami Brahmanand school on Saturday, 2nd of December. Thirty-three special schools of Thane district participated in the sport event that was held in ‘Father Agnel Multipurpose School’ ground in Vashi. Nearly 400 children participated in different events. The event started with ‘March Past’ by all the 33 participating school followed by the lighting of the ‘torch run’ by two students, Ms Laxmi Shetty and Namita Jadhav , (who are selected for the Special Olympics, International, to be held in Shanghai, October2007). The event was declared open by releasing of the balloons in the air.

Different events such as running, soft ball throw, running long jump and shot put were organized for MR children and Hearing impaired children. A special event, ‘Throw ball on wheel chair’, was organized for paraplegics. There was also event conducted for deaf-blind, and orthopedic ally handicapped. Nearly 800 present included children, teachers, volunteers, Medical team, parents and guests. All were given breakfast, lunch, fruits and heath drink. Medals of Gold, silver and bronze were given to the winners. All the students, who participated in the event, were given a gift (hamper bag containing tetra pack of fruit drink and a biscuit packet) Participating trophies were given to all the schools and the ‘Rotating’ trophy was earned by Nakoda school in Bhiwandi (hearing Impaired) and Savitribai school for MR in Bhiwandi. All, who were present, enjoyed the program which started at 9am and ended at 6 pm.

To observe the ‘World Disability’ day, another cultural program was also organized by Navi Mumbai Muncipal corporation on 3rd December. Our students performed Qawali and dance for the program.

My first visit to writers' club.

With empty box of ‘Grey Cells’
I walked into the room
Amidst the group of writers
That loaded words in their boots.

With meekly introduction
Expecting an applause
With clichés and metaphors
I waited to fill the box.

It started with a poem
Followed by the prose
And then there was story
Essay and a report,

Arrows of ‘no’ ‘buts’ and ‘ifs’
Missiles of ‘must’ ‘could’ ‘should’
In the symphony of emotions
The words began their jazz.

Silently I left the room
My booty beneath by arms
Reaching to a secured place
Planted them in my farm.